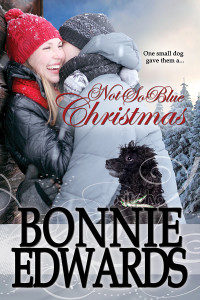 In this second chance at love romance, Kirk Fontaine can’t bear to talk to anyone, let alone enjoy Christmas. Away from home, in a small harbor city in Canada, broken-hearted, Kirk’s lost and alone until one small dog refuses to give up on him.

Vibrant widow Miranda Bailey is ready to move into the next phase of her life, except this Christmas is shaping up to be the worst since her husband’s death. But instead of hiding, she takes charge, and drags Kirk into her Christmas miracle.

How to pronounce Nanaimo? (everyone asks :))   Na-Nigh-Mo

7:40 a.m. and dawn was still too far away to imagine. Not that Kirk Fontaine believed in mornings anymore. The idea of a light sky and sunshine felt foreign and old and impossible, especially above the forty-ninth parallel in mid-December.
Out of the gloom came the tip-tip-tap of running paws along the wooden pier. The woman’s dog must have slipped away from its owner again. The dog with a stalker mentality. No matter where he was on the Nanaimo waterfront, the scruffy little mutt made straight for him. It wasn’t that he didn’t like dogs, it was just that this one came with a woman Kirk could barely take his eyes off of.
A woman like the statuesque blonde had to have a man at home. But in the three months Kirk had been holed up here, the husband hadn’t made an appearance. Not once. Still, being an absentee husband didn’t mean the man didn’t exist. He likely worked long hours the way Kirk used to.
She must be married to a man like Kirk who could ignore his woman because she was where she always was: at home, waiting. She was being a good wife, not making demands on his time, not forcing him to choose between her and the work. A good wife who watched the long days tick away, life slipping by until there was no life left.
Damn.
The dog was too short to jump onto his boat deck. Instead of trying she danced on her hind legs, pawing the air with her forelegs, begging for a kind word and waiting for acknowledgement.
Today, instead of heading below like he usually did, Kirk clicked his tongue at the dog and swung onto the dock to pat her head. Soft hair, warm, brown eyes, and a licking tongue summed her up. Such a simple thing, to give a dog a pat. Such a crazy doggy reaction.
Some days he’d seen the dog’s owner with a girlfriend, but never a man. Most men were given a brief nod as she strode past. He’d rarely seen her stop to pass a few words with anyone. For the most part, the blonde kept to herself. If only she could keep the dog to herself too, Kirk wouldn’t have to ignore it.
But today, he engaged. Couldn’t say why. He was just worn down by the mutt’s constant need for attention.
“I think she might swoon dead away,” he said half under his breath as the dog nearly wriggled off the dock in ecstasy. Two boots appeared in his line of vision beside the dog. The owner, come to claim her pet. He rose to his feet.
Don’t chat me up was written all over her face. Thus far, Kirk had managed not to say more than a couple of words to her, but a man could only take so much stalking from a pooch.
The mutt–and it was a mutt, not some four-way combination of purebred that people loved to brag about–flopped over to offer her belly for a rub. He complied.
Today the blonde’s hair was in a thick, lustrous braid, her ears covered by fuzzy earmuffs in green, white, and Christmas-red stripes.
The woman had candy canes on her ears. How could he not smile at that?
Funny that something like candy canes could bring up the first smile he’d felt in a year.
“I’m sorry. Again,” she said. “I don’t know what gets into her.” The dog skipped away from her mistress so that she had to turn away from him to try to catch the thing. “Come here and behave like a lady.”
The shapely blonde had no idea how good she looked from this angle. Long legs encased in over-the-knee leather boots. Her denim-covered butt peeked out from under a leather jacket. He felt his second smile in a year split his face.
A smile he quickly hid when she grasped the little beggar by the collar and turned back to face him. She pulled the dog up into her arms and raised her wide blue eyes to his. “I think she likes you and wants to be near you for some bizarre reason of her own.”
“Bizarre? Am I such an ogre?”
She flushed like a teenager. Beautifully. “Of course not. She doesn’t even know you. But she’s usually more nervous around men than women.”
“Maybe she just likes what she sees? I’ve tried ignoring her, but she doesn’t take a hint very well.”
The woman’s grin gave him a kick to his gut and Kirk stepped back. He shouldn’t feel a kick. He shouldn’t feel anything. He had no right.
She shivered and clutched the dog closer. “I’d best get back. This is the coldest morning this week and I’m not wearing my down coat.”
He nodded and watched her and her very fine butt stalk up the ramp that led to the seawall walkway that snaked along the waterfront. The woman never strolled, or sauntered, or moseyed. She walked fast and with purpose.
Before she got sick his wife had wanted to visit Nanaimo and when he’d found himself in Canadian waters he’d allowed his cabin cruiser, the Comfort & Joy, to end his weeks-long drift here. He could see why boaters from as far away as San Diego would drop anchor in the snug harbor for some R & R. Joanie would have loved this place.
He told himself she’d be glad he finally got here, but the truth was Kirk couldn’t gather the energy to leave again, so he stayed, clinging to the place like a barnacle.