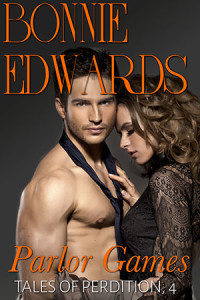 Welcome to Perdition House: a house of sin, secrets and seduction, where the spirits of dead hookers mess with the living…

Matt Crewe has only one desire when he arrives at Perdition House: to sell himself in a sexy bachelor auction for charity. Matt needs to get the truth behind the web of lies that surround the mysterious mansion.

Carrie MacLean needs a career-making break and buying the services of a bachelor for so-called charity will give her all she needs to move into hard hitting journalism.

What neither of them knows is that Perdition House is a haunted bordello and they are already mesmerized by the spirits of the women who once lived and worked there.  They each need to expose the mansion’s secrets but once they make a connection, nothing, not even their own secrets can come between them.  Both Matt and Carrie are cool and competent professionals, intent on getting what they came for…  In a last ditch effort to save their sanity, their lives and their hearts, the truth is revealed and they accept that love found in Perdition House is eternal…