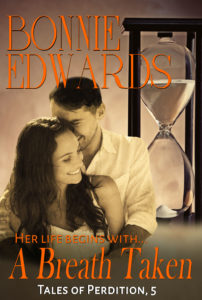 McCann wants a second chance to live. Drawn into a vintage clothing shop by a mysterious woman, she tries on an antique corset…and wakes up in 1913 in the body of another woman.

Dr. Colt Stephens has been attracted to a woman he first met in Perdition House. Unfortunately, he made the wrong assumption about her role in the famous, exclusive, “gentleman’s retreat.”
But now it seems by saving her life, he’s in her good graces and in her bed. She’s everything he’s ever wanted…even if she’s not the woman he thinks she is.

Can Blue McCann learn how to stay in this life she’s been given or will she have to return to the present where death awaits her?

In the fifth installment of Tales of Perdition, secrets are revealed and answers are found…

This link will take you to your favorite ebook retailer:

Blue McCann traced the lines of the corset through the glass of the store window. Ivory satin and lace, the exquisite vintage piece looked way out of her league. She admired the delicacy of the hand stitching, as perfectly even and precise today as it had been a hundred years ago. Timeless, the handcrafted corset pulled her toward the window every time she passed by.

Timelessness was alluring to people whose time was up. Today, she’d gone out of her way to stop by just to look. Silly to dream of having a piece of clothing like this one. Still, the corset pulled at her, made her dream of wearing it. She smiled through her next cough. That’s why she came here in spite of the rain and the unrelenting coughing and pain; the corset reminded her she was a woman and still a sexual being. If she wore something like this corset she might be desired, maybe even loved.

Loved? She must be delusional. A cough wracked her chest and she turned away into the wind. Rain lashed her face so she turned back, chilled. She had to get home before the wind pushed the rain through her clothes.

The coughs deepened. She bent over, hating the hollow feeling in her chest. She leaned on the glass for a moment to catch the little breath she could. Love, the idea was ridiculous, coming from a woman whose very name described the color of her skin when she was found in a restaurant trash bin. The cop told the Head Nurse the newborn girl he’d found had been so blue he thought she was a painted doll.

On another gust of biting wind and rain, the shop door opened and a woman stepped out. “May I help you? Need to use the facilities? Or maybe a phone?” She stepped around Blue and put her hand on her shoulder. Warmth radiated where the woman touched, even through her thin jacket and thinner sweater.

She’d heard of hands like this–healing, warming hands. Blue had always hoped she had them.

The woman’s body shielded Blue from passersby and the nasty wind. “This corner is a raceway for wind gusts,” the woman said. Her warm hands firmly urged her toward the entrance to the store and Blue couldn’t resist the softness of the warm air that drew her into the store.

Out of the corner of her eye, the corset shimmied, but a truck went by and rattled the glass. That was all it was. The weight and rumble of the heavy truck had made the glass shiver. She couldn’t have seen the corset move on its own.

“Thanks.” She nodded at the woman. “I was just…” she hesitated, knowing she was silly to ask. “How much is that corset? It’s beautiful.” The heat from the woman’s hands infused her back and made her feel stronger. She straightened and squared her shoulders.

“Come inside out of the rain and I’ll take a look. I can’t remember the price. But with your coloring, it will look fabulous on you.” Her husky, amused tone made it seem like a done deal, but Blue was broker than broke and living on nothing but dreams and whimsy. And not for long, either.

As Blue stepped to the door, she tried to see the price, but a draft twirled the tag like a leaf in autumn. “Whenever I try to check the price, the tag’s facing the wrong way.” She coughed again and the woman helped her to a stool by the cash desk. The woman’s healing hands fell away and Blue sank onto the stool, appalled at how weak she felt.

“I don’t want to cause you any grief with your boss,” she said when she could. She knew how she looked. This kind of store didn’t entertain her kind of customer. The broke kind and now that–

“My name’s Faye Grantham,” the woman’s voice cut off Blue’s thought, “and I am the boss. Welcome to TimeStop.”