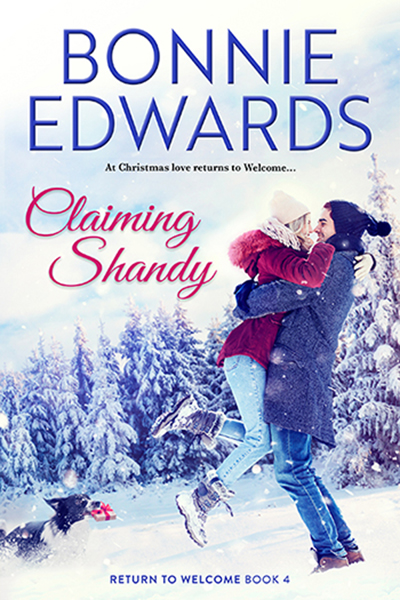 Buy on Amazon – All Territories
Free to Kindle Unlimited subscribers

She thought her divorce was final…

Welcome WA, where rumor, gossip, and old grudges endure long past their best before date.

Justin Camden wants his life back. His wife back. His son back. And he’s returned to Welcome to get them. Justin has a plan for the Christmas season and moving in with his ex and his boy is just the beginning.

Shandy Camden is stuck. Her big oaf of an ex-husband has finagled his way into her home for the entire month of December. He claims to want an old-fashioned family Christmas with their son. She’s forced to let Justin stay because refusing will break her son’s heart.

Slowly, Shandy sees that her ex may have another agenda. But she doesn’t believe in the magic of Christmas the way their son does. Helpless and forced to live with her ex, Shandy struggles to overcome her growing attraction to the only man who’s ever left her. The only man she’s ever loved. But Justin left once and if he leaves again, she’ll never recover, and neither will their son…

When the truth comes out, Shandy and Justin may well have discovered that more than anything, Christmas is about love.

Justin Camden was no quitter. Never had been and he wasn’t about to give up now. But first he had to do battle against the dragons breathing fire in his gut. He’d never been this scared. Not even at fourteen when his dad caught him out driving his mom’s car at midnight.

He parked outside the Welcome Bar & Grill and called his buddy, Jake Morrow who was inside with a group of friends. Friends who included Justin’s wife, Shandy.

Everything he wanted to accomplish tonight hinged on whatever BS line Jake had come up with. “It’s me. I’m here. What did you tell her?”

In the background, Justin heard happy people greeting each other over the distant sound of a Christmas song. The season had begun. He climbed out of his car while he heard Jake excuse himself to take the call.

The background noise had receded, but Justin couldn’t have heard right. “What?”

“Every hotel in the area’s infested. Didn’t you know?” Jake said with a smirk in his voice.

“She’ll never believe that.” He had his hand on the brass door pull. Yanked it toward him.

“I believe she does believe me.”

He shook his head. No way. Shandy was the smartest woman he’d ever met and for the past three years, she’d been made of stone. He had to make her crack, but nonsense about bedbugs wouldn’t do it. The flame-thrower in his belly belched. Maybe he should turn around and leave.

“Plus, I told Shandy how much Brianna and I are enjoying our honeymoon period,” Jake was saying. “She can’t force you to stay with us. She has to let you stay at her place. She’ll have no choice.”

“Our place.” The home they’d bought together, to raise their family in. “You ass. Bedbugs?” He was inside the vestibule now, looking through the stained-glass partition, searching the restaurant side of the building. “I see the table.”

Jake stood a few feet away from the group. “Don’t worry, you got this,” he said, looking right at him through the multi-colored pane.

“My best and only shot.” He ended the call, plastered a smile on his face and made his way through the tables to where Shandy sat beside an empty chair. If this crazy bedbug story worked, he’d have a chance to get her angry. He needed her angry.

If she were angry with him, it was a sign that she still cared. That he could still make her feel something for him.

An angry Shandy was honest, and open. Angry Shandy was not a stone angel, cold and remote, the way she’d been for too long. He needed honest and open or his plan to return to Welcome and be the husband and father he wanted to be would fail.

Justin Camden was no quitter. He doused the flames in his gut.

On the restaurant side of the Welcome Bar & Grill, at a long table full of good friends, Shandy Camden was the only one with an empty chair beside her. Maybe next year, she’d have a special someone to join her for these fun evenings. Three years was long enough to be alone. With her son, Josh, getting older, and more understanding, it was time to find a special friend. Or a love.

She eyeballed her friend Jake Morrow, with a jaundiced eye. They’d known each other their whole lives. He was recently married to Brianna, a newer, but close friend. He was a prankster—not as good as he believed—and his bedbug story rang false. It wasn’t that Shandy didn’t believe bedbugs could infest a hotel. The idea that all the hotels in town were crawling with them at the same time seemed ludicrous. Jake was on his phone a few feet away from the table.

Whatever the reason for this bedbug nonsense, it had nothing to do with her. Acutely aware of the empty seat beside her, she resolved to get to work on dating again. She’d made halfhearted attempts, but nothing short of determined persistence and an open heart would win this battle. For the new year, she promised herself she’d join the Dating Wars and win.

The Welcome Bar & Grill was the most popular place in town for groups to gather for dinner. The other side, the bar side, catered to adults. Men who came in to nurse a beer and hang with buddies, or couples to share a bottle of wine and appetizers. It was also the best place in town to get the juiciest gossip.

Unless you counted the Welcome Bakery. You could catch up on some good drama there sometimes, too. If she started dating, she’d be the target of the gossip. Shandy didn’t much like being the subject of juicy rumor, so she determined that it should only be the very best kind. The happy kind.

Her son, Josh, sat across the table and down a couple of seats beside Dilly, a five-year-old favorite of his, who belonged to Clay and Mercy Foster. Josh liked to help Dilly color and do puzzles.

Smiling at the sweet nature of her son, she studied the drinks menu for something festive to kick off the holiday season. Her last lonely Christmas.

She sighed and believed, without a doubt, that next year’s Christmas season would be full of love and the joy of a loving relationship.

She’d just decided on her drink order when her big oaf of an ex-husband landed in the empty chair beside her. Justin.