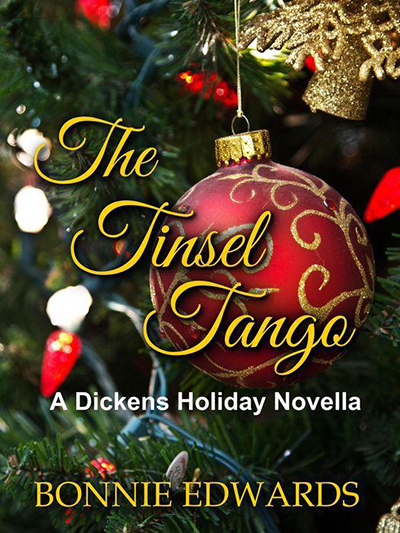 The Tango AKA The Dance of Love…

Brenna James is forced by her boss to take an early Christmas break in Dickens to regroup and relax. When she decides to take tango lessons to take her mind off her desired promotion, she finds her instructor, Jett … Smith intriguing and he may not be who he says he is…

Tycoon angel investor Jett Somers is masquerading as a dance instructor while he searches for the inventor of a process that could change the world. Jett’s never had a Christmas before, but his new student Brenna sweeps him up in her family and her Christmas spirit.

Mixed signals and secrets threaten his plans and his hoped-for future with Brenna, the woman he loves. Can one more tango give him everything he longs for?

Brenna James needed to relax, and recharge, and she had to care enough to do it. But she didn’t want to relax or recharge. She wanted her promotion and relaxing wouldn’t get her the Marketing Director position she’d worked hard for. “Arrgh! This is stupid!”

Driving to Dickens alone when she normally crowded into her father’s SUV with her mom and sister, felt like spite against her boss.

“See?” she muttered to the empty car, imagining Bry’s smug face. “I’m fine. I got myself this far, didn’t I?” Her stomach growled from hunger, and she was still two miles out of town, but closing fast.

Over the past months, she’d worked herself down to a too-thin, too-anxious wraith of her former self. She’d given her all and yet, here she was with direct orders from Bry to recharge and regroup because she was too anxious and…

Having panic attacks hadn’t helped her either. So, yeah, she needed to find a way to quit freaking out when things at work came at her like belches of burning lava. Gasping for air, clutching her chest, and storming around the room searching for an exit wasn’t a good look for her.

When all that had happened in the middle of her career-making presentation before an audience of twelve it had been noticed. Big time. She could still see their expressions of shock, horror, and pity as she’d lost her—shi—control all over the boardroom.

The humiliation made her sour and worse, the kind words from the V.P. of Accounts, Bry Johnson, had been a death knell. The truth was Bry hadn’t been smug when he’d talked to her, he’d been concerned. “Take some time off, it’s nearly Christmas. Aren’t you heading to that town your family drags you to?”

Dickens. Yes, she was heading to Dickens for a James family Christmas. While she was there, Bry had suggested she soak up the small-town ambiance, the quaint atmosphere, the boring, old-fashioned traditions.

She’d have to share a room with her sister, Kayley, and their cousin, Trix. They’d flip a coin for the bunkbeds, or the single bed jammed into the corner of the tiny room. Then they’d flip again for the top or bottom bunk. Secretly, she loved the top bunk and no matter what happened with the coin toss, she offered to take it.

That might be fun. Seeing her family would be cool. She hadn’t seen them in far too long. Thanksgiving had come and gone because she’d been grinding the campaign for Cheez-Wackos. She’d worked straight through the holiday on the campaign that should’ve guaranteed her promotion. Trying to find the words to sell a product full of unpronounceable chemicals as a healthy snack had done her in. Had made her ripe for panic when she’d faced all those bored faces.

They’d hated her concept on sight and when she’d seen their clients fidgeting, panic had come over her like an eruption. She’d dropped the remote control for the large screen from nerveless fingers. All she’d worked for slid away into a drain. The images on the screen had swirled before her. Black spots had narrowed her vision and her lungs had just…stopped. That’s when she’d wanted to run, run, run…

If she didn’t quit thinking about it, she’d be back there, in that panicked state. She pulled her car to a stop on the gravel shoulder. The sign welcoming her to Dickens had been freshly painted in forest green with gold scroll lettering. Someone had stuck a bright red plastic poinsettia flower on top of the sign.

Christmas had come to Dickens. And so had Brenna James.

The season and all its traditions would help her regain her focus. Then, she could return to work and wow Bry with her can-do attitude.