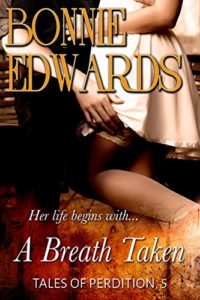 Blue McCann wants a second chance to live. Drawn into a vintage clothing shop by a mysterious woman, she tries on an antique corset…and wakes up in 1913 in the body of another woman.
Dr. Colt Stephens has been attracted to a woman he first met in Perdition House. Unfortunately, he made the wrong assumption about her role in the famous, exclusive, “gentleman’s retreat.”
But now it seems by saving her life, he’s in her good graces and in her bed. She’s everything he’s ever wanted…even if she’s not the woman he thinks she is.
Can Blue McCann learn how to stay in this life she’s been given or will she have to return to the present where death awaits her?
In the fifth installment of Tales of Perdition, secrets are revealed and answers are found…