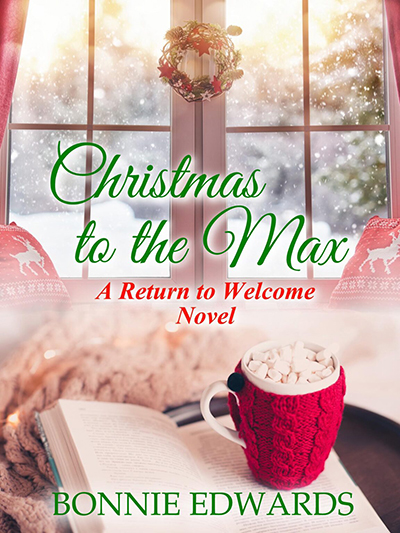 Buy on Amazon – All Territories

Max Whyte moves to Welcome WA to live closer to his daughters. He wants to fix up an old home, settle into his new job, and try not to think about turning forty alone.

Burned by a single mother before, he vows not to get tangled with another woman with children. When he saves the life of a small boy, he finds himself hooked in more ways than he can imagine.

When the boy’s mother turns out to be the perfect person to do his renovations, Max has trouble keeping his personal feelings out of their employer/employee relationship.

Kaylin Simpson has returned to Welcome to give her boys the kind of home she wanted as a child. She needs a fresh, stable start and to run her own business. Her three-year-old twins keep her hopping, but after she finishes the renovations for Max, she hopes to have her life well in hand.

Max is drawn to Kaylin and her adorable twin boys despite his reservations. Her wit and feisty spirit pull at his heartstrings until he remembers being a stepfather is never what he wanted.

Kaylin’s gutsy spirit changes her view of herself. She and Max struggle to find a way to move beyond past hurts to let love blossom.

Kaylin Simpson loved her twins. She truly, really, did. But some days she could scream until her throat collapsed and they wouldn’t hear a thing. She’d thought two two-year-olds were hard. Having three-year-olds was a brand-new level of hell. They talked back, got stubborn, and were more curious. And taller, stronger, capable of climbing onto chairs and getting into cupboards.

And they were faster.

It was being faster that would kill her one day. Or them. Whatever. Someone would be dead.

Right now, Brody was telling a little girl to go down the slide when she clearly didn’t want to. The poor child looked scared and Brody yelling in her ear wasn’t helping.

“Brody, please let the little girl take a breath so she’s not so scared. And DON’T PUSH!” But he did, and Kaylin dashed for the end of the slide to catch the wailing child.

Too late, she realized she’d taken her other eye off Taylor. She scooped up the girl before she landed on the ground, and then spun her head to scan for her other boy.

There. By the swings. “Taylor! Stop right THERE!” But he didn’t.

No, not her Taylor. He turned his head, glanced at her with a devilish grin and dashed for the road. Chase. He wanted to play chase.

Kaylin set the girl on her feet and ran after Taylor who’d already stepped onto the road. A car took the curve on Cross Street too quickly and Kaylin screamed her boy’s name. Screamed it again. And again…

A man, tall, dark-haired, and with broad shoulders got there just before Taylor ran headlong into the car’s path. Kaylin’s heart stalled and her eyes stung.

Gasping for breath, she nearly collided with the big man who cradled her son in his arms, his large palm covering Taylor’s head in a protective move. Taylor didn’t seem to understand what had happened until he looked up into the stranger’s face.

And screamed blue murder an inch from the man’s nose.

Tires screeched as the driver slammed on the brakes. A woman opened the passenger side window. “Oh, my Lord! Did I hit him?” Her eyes were terror-filled, and her voice trembled.

The man shook his head and seemed to hold tighter to Taylor as he bent toward the opened car window. “No,” he said. “But you took that curve pretty fast.” He didn’t yell it, the way Kaylin wanted to, but he got his point across.

The woman looked shaken and chastened. She eased the car to the curb and rested her head on the steering wheel. She’d been as badly shaken as Kaylin and the stranger.

A sudden screech from behind her had Kaylin spinning to see where it had come from. “Brody! Don’t you dare!”

She snatched Taylor from the stranger’s arms and lumbered under his weight back toward the swings where Brody was attempting to climb onto the big kids’ swing. He’d been complaining for weeks about the baby swings and she wasn’t sure how much longer he’d agree to use them.

She was still shaking over the miss with the car and wanted, more than anything, to get these boys out of this park and home where she could contain them.

If only she had the energy. She let Taylor slide to the ground and clasped his hand firmly as she walked the rest of the way toward the swing set. “We’re going home,” she announced in her most commanding tone, “as soon as I thank that man for saving Taylor’s life.”

Brody, for once, looked contrite. “I saw, Momma. He’s over dere.” And her boy pointed to a picnic bench that faced the river.

The man sat atop the table alone. His silhouette against the light showed broad shoulders that tapered to a trim waist. She already knew he could move like lightning when he needed to. His hair was trim on the sides but had some length on top. Odd that he’d be alone in a park on a lovely morning. Most people were jogging along the riverside trail or in the playpark like she’d been.

As she walked toward him, he pulled out his phone and started thumbing the screen as he scanned it. She hadn’t seen him here before, and she recognized a lot of the regular park users.

She used to know a lot of people in Welcome when she was a kid. And he wasn’t one of them, either.

Correction. Her aunt and uncle had known a lot of people here. She’d only been a summer visitor, so she’d been limited to knowing some of the neighborhood children. Still, Welcome was where her most carefree memories rested. Even though her aunt and uncle had retired to Arizona, it was Welcome that had called to her when she’d needed to make a change in her life.

Returning to Welcome last month hadn’t been as easy as she’d expected. Her business hadn’t taken off the way she’d hoped, and daycare was more expensive than she’d planned for. She certainly could not take her kids to work. Construction sites were not safe for curious children.

Some of the people she remembered in Welcome gossiped and held grudges, but for the most part, people here were okay. Like this man who’d jumped into action for a total stranger. Gratitude made her heart lighter than it had been in weeks.

She had her boys safe and sound. That was what mattered.

“Hello,” she said as she pulled alongside the picnic bench. Both boys for once, were silent, as the man raised his gaze to assess her.

“Yes?” He made a face as if she’d interrupted something important.

“I wanted to thank you for what you did. I’m still shaking and I’m sure I never would’ve got there in time.” She’d been two steps away, but still, they were the longest two strides ever.

His gaze raked the twins and his eyebrows rose. “You’ve got your hands full, but next time keep a closer watch on them. I won’t always be around for back-up.”

Typical non-parent, always certain children could be corralled or held back or kept safe every second of every day and that they listened. Hah!

Kaylin backed up a step. “Sure, I’ll keep a tighter grip. Maybe tether them to a stake in the ground. Keep them in the basement in cages, maybe. You’ve given me a lot to think about in regard to keeping my children safe.” She raised her right eyebrow and glared at the know-it-all. “Thanks for that, too.”