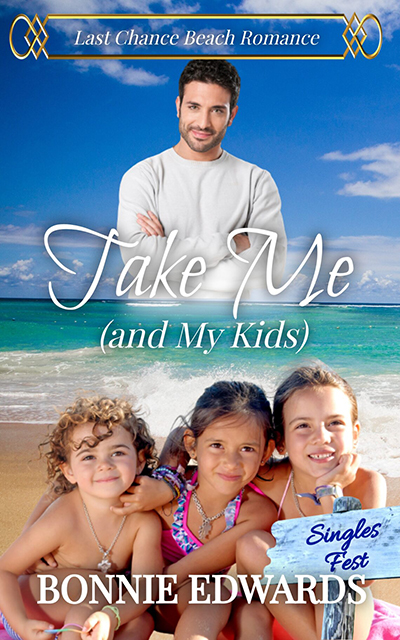 Take me, take my kids. Simple. Unless the woman of your dreams has the best reason in the world not to.

Single dad Jesse Carmichael met the woman of his dreams in Last Chance Beach, but when she heard about his three children, she bailed. Hard.But Jesse has a plan.Eva Fontaine has two stepdaughters in the custody of their grandparents. Her life is centered on staying in their lives. She’s the only mother they remember, and she moved across the country to be near her girls. She needs to reconnect with them, while avoiding handsome, caring Jesse. There’s no way she’ll get involved with another single dad.Loving Jesse means loving his children. She’s done that once and her heart can’t take another beating if she should lose them, too.But Jesse has a new plan to help her and Eva’s onboard with it.

Until his children throw another major obstacle in their path.

And now, Jesse has a plan for that, too.

… Loved getting to know and and reading about the kids: Raine, Thea, Tyler, Sophie and Jilly. Watching them all grow, go through hardship and come together was amazing. Great read and I highly recommend this wonderful story.

Jesse’s not really a stubborn man, but he sure is determined. As a widowed father of three, he’s ready to move on. Yes, he’s ready, but he is picky. When he finds the right woman, he’ll fight tooth and nail to help her get her children back. He surely knows how a spouse’s death impacts a family and especially the children. That ‘right’ woman he found, her name is Eva and her girls aren’t her biological children.

“But you promised I could see them this weekend.” Eva Fontaine clutched her phone so hard she thought the screen would crack. She eased her grip and held her breath.

“I don’t recall promising any such thing. We’re taking Sophia and Jillian to visit their uncle and cousins. Their real family.” Estelle, her husband’s former mother-in-law and the girls’ grandmother, never missed a chance to slash Eva’s heart open. Eva felt it bleed out, down her chest to the ground beside her fun Italian scooter as she stood in her driveway.

“They’re Sophie and Jilly,” she whispered, desperate to keep their names in her heart.

Sophie and Jilly despised visiting their cousins. They were bullies and emotionally abusive and had reminded them constantly that their mom was gone, and they had to suffer having a stepmother. The cruelty continued until Sophie and Jilly had cried at the thought of seeing their cousins. She hoped they didn’t cry today. Or maybe they knew it was useless because no one cared about the taunts.

Eva bit her lip so she wouldn’t say the words she wanted to say to the girls’ grandmother. Instead, she reminded herself that this woman had lost her daughter and now her son-in-law, Eva’s husband. The loss was a festering wound that made the woman hold her grandchildren with an iron grip.

The older woman had suffered too much loss; and had no room in her heart to understand Eva’s place in the girls’ lives. She understood Estelle and Bernie feared Eva might keep Sophie and Jilly away, but she could never do that. Eva could never treat them the way they were treating her.