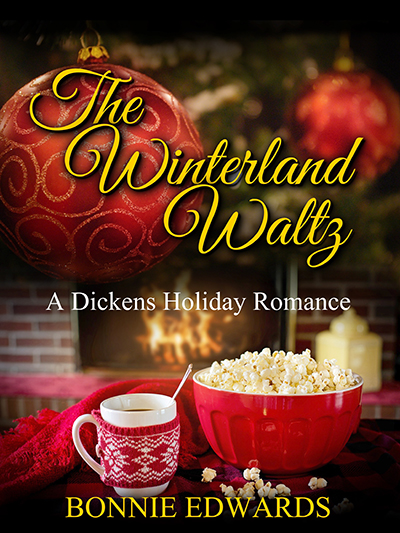 In the quaint Christmas town of Dickens, love will always find a way…

When Kayley James learns she’s the “other woman,” she retreats to Dickens distraught. She needs an apartment, a job, and a touch of Dickens Christmas magic to get back on track and trust men again.

Nathan Brent, her new landlord, has secrets he can’t share. As his friendship with Kayley blossoms into thoughts of forever, he scrambles to clear up past mistakes before she learns his ugly truth. Nathan has a long-lost Vegas bride and she’s just shown up in Dickens with blackmail on her mind.

If you love small town romance with humor, matchmaking neighbors, and warm characters, you don’t want to miss The Winterland Waltz.

A flash of Christmas red outside his living room window caught Nathan Brent’s eye. He was painting the windowsill when he looked out to his front walk. A woman stood there, dressed in a red puffy jacket, black jeans, short, sexy, ankle-high boots. He set his paintbrush down on the edge of his paint tray and watched the woman he’d been waiting for walk up the paved path to his front steps. Through the grimy window he saw she was taller than average, with black hair and a jaw that could cut glass. Gorgeous.

She was dressed like a woman who understood how great she looked. A confident woman, a woman on her way up.

But her posture, her manner, made a lie of her clothes.

Stupid to notice her turned down lips, the hunch of her shoulders, the way she hesitated at the foot of the steps. Don’t ask! Not your problem. Don’t even wonder.

Coop, his lawyer and one of his oldest friends, had warned him not to let a woman’s need touch him. Nathan had to learn he couldn’t save the world. Coop continually reminded him that since the inheritance, he had more to lose. Nathan waited to see what his potential tenant decided as she stood, looking forlorn, hesitant, beaten down.

Would she walk up the steps and ring his bell? Or give in to whatever it was that made her hesitate? Her choice.

He stepped back into the shadow of the room to avoid influencing her decision. Not his business if she changed her mind about renting the suite in the duplex. His unit was on the right, hers on the left. The veranda covered both fronts with a wood privacy screen between the entrances.

But there was only one walkway from the sidewalk. She stood at the Y juncture, hesitating. Not his business.

Technically, it was his business because he wanted to rent the unit, but her heart, her mind, were definitely off limits. No asking. This time it was Coop’s admonition and Nathan needed to listen.

The woman glanced left and right as if expecting to be hailed by a passerby, but there were no other people on the street. He figured most of his neighbors were out shopping for deals at the outlet mall because that was what most people did on the day after Thanksgiving.

In Dickens, people loved a bargain. His neighbor ladies especially. Like clockwork, Margot and Iris told him every Wednesday about the upcoming specials in the weekly grocery store flyers. They were chatty, but harmless and he didn’t mind being their go-to guy for small things he could help with.

The hesitant woman shrugged, squared her shoulders, and then strode up the steps, looking bright and determined. The smile she forced to her lips changed her demeanor from dejected to focused. Her posture and demeanor now matched her confident clothes.

For reasons of her own, his prospective tenant was putting on a show with her confident stride and straight back. He moved from the front room to his front door. Clamping down on his curiosity, he opened up before she could knock.

“I must be,” he quipped. “I just answered my door. You were about to knock, right?”

Up close like this he saw her dark blue eyes widen in her pale face. Light freckles dotted her cheeks and trooped across her nose. She wore her cheekbones like a model and even without make up, she looked fresh in the crisp late November air. The tip of her nose showed pink. Time to get her inside.

“Let me get the key and I’ll show you the apartment. It’s the door on the other side.” He rapped a knuckle on the wood bisecting the veranda.

She nodded and stepped down and back up to the other door, while he stirred the bowl on the hall table to find the correct key ring. He exited, turned, and locked up. Then he smiled to himself.

“Old habit,” he muttered. “I locked my door because I’m from Chicago and locking your door is second nature. In Dickens, people have a passing interest in security. It takes getting used to.”

“Like it’s an insult to the neighbors if you lock up when you leave.”

He looked into her dark blue gaze then and saw a faint light of humor dance there, in the depths, behind the sadness. “In case they want to run inside to steal a cup of sugar or something.”

She shook her head. “Borrow. People borrow sugar.” Her smile wasn’t as brittle now. “In Dickens, you’ll get your sugar back.”

Her smile warmed. “Hah. I see what you did there.” Kayley gave him a headshake, but the light of humor in her gaze flared brighter.